What to Consider When Deploying Tunable Transceivers 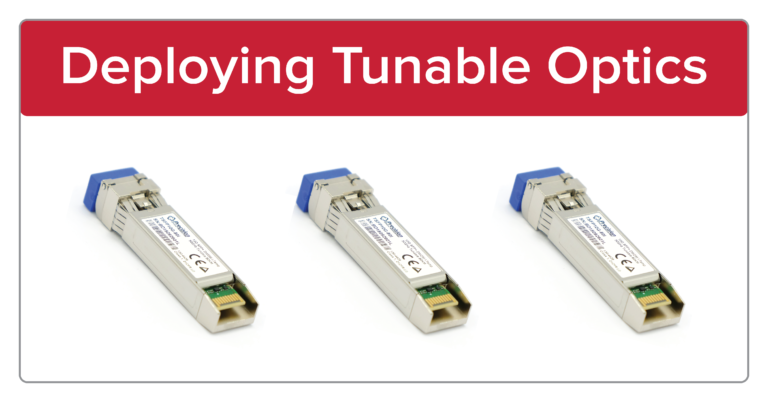 Tunable transceivers represent a cutting-edge technology that allows on-site wavelength adjustment, transcending the fixed-wavelength limitation of traditional static transceivers. The need for tunable devices has become increasingly important as networking technology continues to develop. Dense wavelength division multiplexing (DWDM), which is expected to serve as the central technology in the future of optical networking, allows data of different wavelengths originating from different sources to share a single optical fiber.

Weighing Out Pros and Cons

One drawback of static transceivers is that multiple backups are needed to minimize network downtime in a DWDM environment, given the range of wavelengths present. This can greatly increase operating cost. While it’s true that individual tunable transceivers tend to cost between two to four times more than their static counterparts, they can both minimize cost and maximize flexibility when considered in the context of the system overall.

The flexibility afforded by tunable transceivers is also key to adapting to the needs of a growing network. This aspect will only become more important as transmission rates increase and flexible channel spacing becomes crucial to networking success.

Our Management Solution: The TN100 Series

Fortunately there is a solution: a transceiver management module, also known as a tuning box, which features ports designed for hosting tunable transceivers and that works in conjunction with tuning software.

Precision’s TN100-XS tuning module is a USB-powered device capable of hosting both SFP+ and XFP devices. It allows for tuning to any of the standard ITU C-Band 50GHz or 100GHz spaced channels.

The TN100-S-BT is a Bluetooth® powered compact device capable of hosting SFP+ devices, allowing for on-the-go tuning through a proprietary mobile tuning application. The device also allows for tuning to any of the standard ITU C-Band 50GHz or 100GHz spaced channels.

Tuning software is included with both devices and offers the advantage of being web-driven, meaning that the device will stay up-to-date without the need for manual installations of new firmware, or the inherent security compromises that accompany manual network interaction.

To learn more, contact the experts at Precision Optical Transceivers or check out our Ultimate Guide to Tunable Transceivers video!